How Science Is Unlocking the Secrets of Addiction 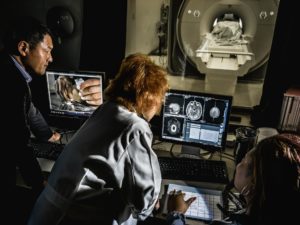 Patrick Perotti scoffed when his mother told him about a doctor who uses electromagnetic waves to treat drug addiction. “I thought he was a swindler,” Perotti says.

Perotti, who is 38 and lives in Genoa, Italy, began snorting cocaine at 17, a rich kid who loved to party. His indulgence gradually turned into a daily habit and then an all-consuming compulsion. He fell in love, had a son, and opened a restaurant. Under the weight of his addiction, his family and business eventually collapsed.

He did a three-month stint in rehab and relapsed 36 hours after he left. He spent eight months in another program, but the day he returned home, he saw his dealer and got high. “I began to use cocaine with rage,” he says. “I became paranoid, obsessed, crazy. I could not see any way to stop.”

When his mother pressed him to call the doctor, Perotti gave in. He learned he would just have to sit in a chair like a dentist’s and let the doctor, Luigi Gallimberti, hold a device near the left side of his head, on the theory it would suppress his hunger for cocaine. “It was either the cliff or Dr. Gallimberti,” he recalls.

Gallimberti, a gray-haired, bespectacled psychiatrist and toxicologist who has treated addiction for 30 years, runs a clinic in Padua. His decision to try the technique, called transcranial magnetic stimulation (TMS), stemmed from dramatic advances in the science of addiction—and from his frustration with traditional treatments. Medications can help people quit drinking, smoking, or using heroin, but relapse is common, and there’s no effective medical remedy for addiction to stimulants like cocaine. “It’s very, very difficult to treat these patients,” he says.

More than 200,000 people worldwide die every year from drug overdoses and drug-related illnesses, such as HIV, according to the United Nations Office on Drugs and Crime, and far more die from smoking and drinking. More than a billion people smoke, and tobacco is implicated in the top five causes of death: heart disease, stroke, respiratory infections, chronic obstructive pulmonary disease, and lung cancer. Nearly one of every 20 adults worldwide is addicted to alcohol. No one has yet counted people hooked on gambling and other compulsive activities gaining recognition as addictions.