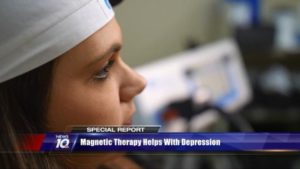 Detailed is the story of a woman suffering severe depression who, despite medication and therapy, was hospitalized multiple times as she tried to handle her depression and thoughts of suicide. Then she heard about a treatment called transcranial magnetic stimulation, or TMS.