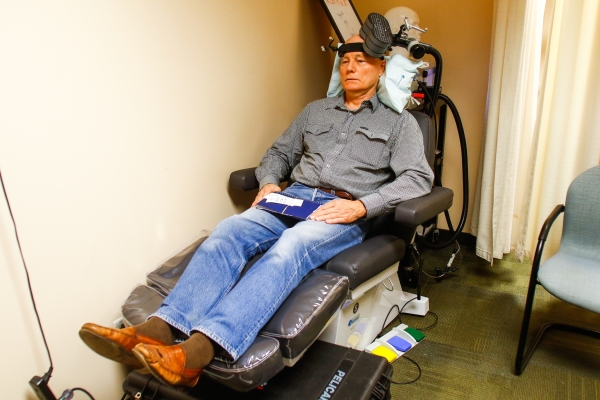 For the last 40 years, Brandon Gregg has lived a “half life.”

Gregg, a 69-year-old Burlingame resident, has major depression. He’s constantly tired, easily irritated and unable to complete even simple household tasks. His depression made working near impossible as his symptoms worsened and engaging with others became increasingly difficult. He eventually decided to manage investments from his home and also withdrew from personal relationships.

Gregg’s mood disorder has resisted treatment of all kinds: He has tried more than 30 different kinds of antidepressant medications, electroconvulsive therapy, ketamine (a narcotic) therapy, a surgically implanted nerve stimulator in the region of the brain out of which depressive symptoms arise, participation in more than 15 clinical trials and more than 100 rounds of transcranial magnetic stimulation (TMS) therapy, a noninvasive procedure that uses magnetic fields to send signals to that same region of the brain. Earlier this year, he was scheduled to take a more experimental, invasive and expensive step: deep brain surgery.

Instead of the traditional version of TMS therapy that Gregg had received previously, Williams is studying how accelerating the pace of TMS — treating patients over several days rather than several weeks — would affect their symptoms.

Gregg’s first treatment with Williams was this May. He didn’t feel anything at first — and he said he’s trained himself not to get excited about promising treatments given his track record — but Williams noticed his facial expressions start to change. (When people are depressed, they’re less able to engage the muscles that in most people automatically produce a smile, Williams said.)

By day five, for the first time in several decades, Gregg no longer met any clinical criteria for depression. His condition was considered remitted.